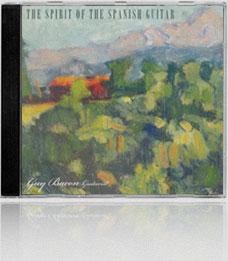 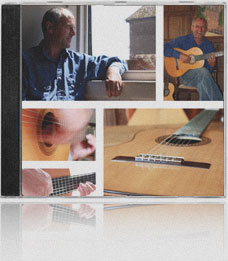 Luckily, Guy Bacon seems to have been endowed with the same musical talent of his predecessors and here presents a superb “classic” programme featuring some of the stalwarts of the Spanish guitar repertoire. Technically he is a very capable performer and his musicianship in the interpretation of these works is well up there with the rest of them.

The Spirit of the Spanish Guitar by Guy Bacon is now available for download at the following major digital stockists: 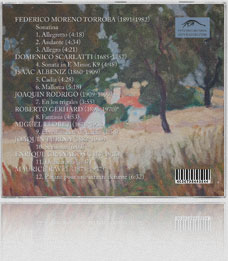 Born in Paris in 1964, Guy Bacon is the son of the American guitarist and lutenist Joseph Bacon and the grandson of the American composer Ernst Bacon, both of whom are invaluable lifelong family and musical influences. Other excellent teachers and inspirational heroes are too numerous to mention here, but come from all walks of musical life.

Having studied formally at Trinity College of Music in London and Manhattan School of Music in New York City culminating in a Masters degree in performance, Guy went on to teach at various conservatories, universities, schools and colleges in both the US and England, where he continues to teach and perform in England’s West Country.

Although most of the pieces here were written by bona fide Spanish composers, the informed listener will know that in reality Ravel was French and Scarlatti Italian. Due to their close musical and cultural links to Spain I’ve included them both as “honorary Spaniards” for the purpose of this recording. Most of the recording was made in April 2007. The work was undertaken in the library of Peek House in Devon near Lyme Regis on a beautifully lustrous instrument named La Sombra, built in 1997 by Liam Romanillos. However, I managed to unearth a much older recording in my attic. After the ravages of time and travel only two tracks had survived, these being Maurice Ravel’s Pavane pour une infante défunte and Roberto Gerhard’s Fantasia, both of which now appear on this recording. I recorded these way back in July 1994 at MoMA PS1 Contemporary Art Center in New York on a rare 1972 maple guitar made by Liam’s father, José Romanillos*. I was determined not to use any electronic alchemy to enhance the natural sound of both the guitars and the recording venues. Despite being separated by many years and miles I found, to my surprise, the natural reverberant acoustics of both recording rooms were similar enough for the two separate sessions to be included together here on the same disc. The guitars matched perfectly of course. The soundboards for both guitars had been hewn from the same Swiss Spruce tree by José in the 1970s, and both were made by Romanillos and Son, the illustrious family of luthiers here in Dorset, where I also live.

We use Paypal for secure payments online. You can pay with your Paypal balance or with a credit or debit card if you do not have a Paypal account.

Packages are securely wrapped for protection and sent out by Royal Mail 1st Class Post.

Samples from the Album